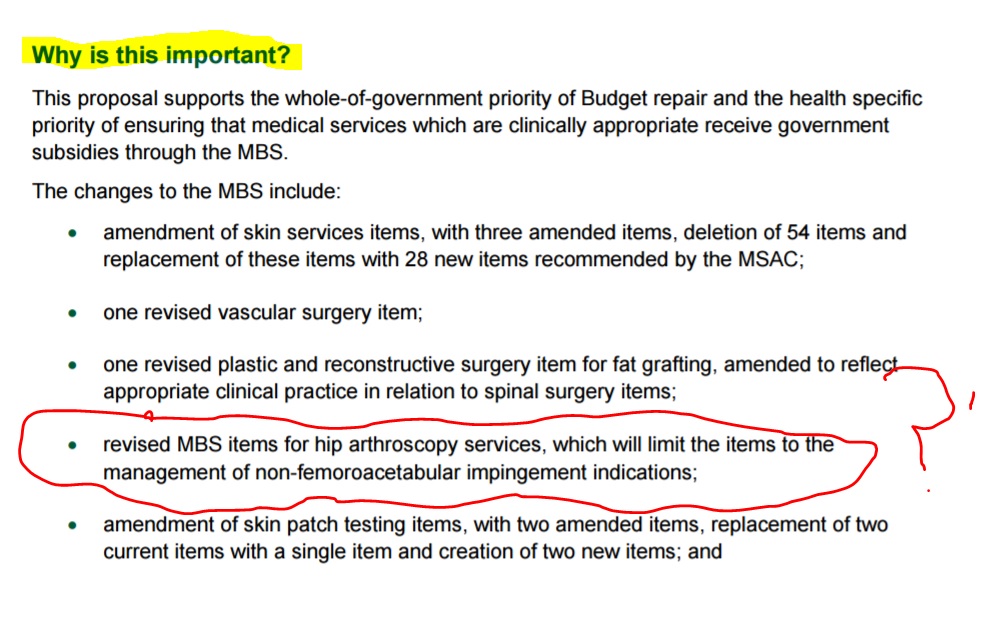 The Australian government has just announced it will cut funding for hip arthroscopy in the management of Femoroacetabular Impingement Syndrome.

In outlining the 2016-2017 budget, the ‘Medicare Benefit Schedule’ states in relation to hip arthroscopy:

“revised MBS items for hip arthroscopy services which will limit the items to the management of non-femoroacetabular impingement indications.”

These changes will take effect as of the 1st of November 2016.

Why has this decision been made

We can not speak for the Australian government.

However, in recent time the popularity of FAI surgery/hip arthroscopy has been on the rise around the world, at a great cost. Despite this trend, there is a lack of high quality evidence supporting hip arthroscopy for FAI.

Will this be a final decision?

This is unclear in our opinion. At present there are a number of randomised clinical trials currently being conducted on the potential benefits of FAI arthroscopy surgery.

These studies are a step in the right direction in establishing science and evidence on how to best treat and manage FAI and have been summarised in the recent consensus statement from international experts:

We look forward to the results of these trials.

If you have previously had an arthroscopy for FAI, or were considering one, we welcome your thoughts and questions on the Australian Governments decision in the comment box below.